He encouraged every Catholic and baptized Christian to fearlessly proclaim the truth of the Gospel through every appropriate path:

“Never tire of firmly speaking out in defense of life from its conception and do not be deterred from the commitment to defend the dignity of every human person with courageous determination. Christ is with you: be not afraid!“

The darkness in the world threatens to overwhelm you but if you stay close to Christ, it cannot. Clinging to Christ, two things are vital to remember: who the true enemy is, and that the war has already been won.

But the devil, our true enemy, has already lost definitively, knows it, and is frantically at work to separate us from God and others while he can.

As you engage in the struggle, remember the big picture: Christ has already won the victory! He asks only our faithfulness –with His help!– and He will take care of the rest.

“I plead with you – never, ever give up on hope, never doubt, never tire, and never become discouraged. Be not afraid.“ ~Pope Saint John Paul II

The battle has been won for us, the enemy has been defeated, and we are marching confidently toward the Victorious One. Trust Him and do not be afraid!!

Pope Saint John Paul II, we love you! Pray for us!

See the fruits of JPII’s inspiration

In 1997, our four foundresses took John Paul II’s New Evangelization initiative personally to heart! His wisdom became their support and spurred their decision to step out in faith at the call of the Holy Spirit to begin this new community. Today, 25 years later, the Community proves to be a remarkable instrument of the New Evangelization through its presence of consecrated religious Sisters in classrooms across the country, the Education in Virtue® program, and multi-media platform OpenLightMedia.com.

Hear the reflection of one of our founders, Sr. Joseph Andrew
Support our Sisters
Explore Vocations 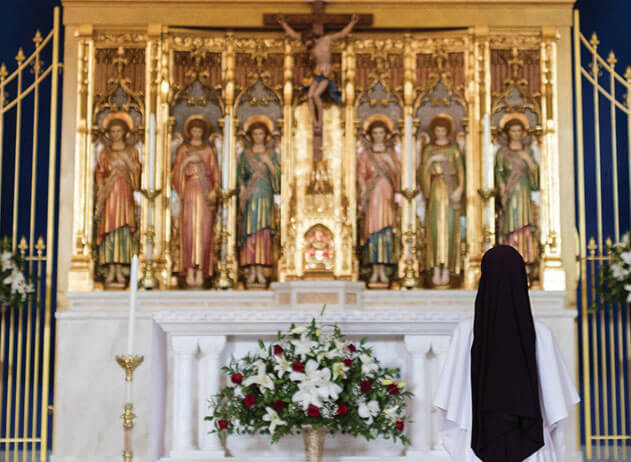